The year is 1544 and King Henry is engaged upon Royal progress. He halts in Wedmore to afford his subjects (those aged 12 and over only please!) an audience with their Sovereign Lord and King. He arrives in the Village Hall clad in that most splendid bejewelled and golden costume, so familiar to us from the Holbein portrait.

Yet despite having recently married his sixth wife, the King remains angry and vengeful. He is ill and greatly pained by his badly infected leg. The events of his long reign have returned with force to trouble the later years of his life and the trials and tribulations caused by his many wives and children continue to irk him.

Thanks to detailed research, the King’s memories are crystal clear. There is no danger, as in more recent royal interviews, that ‘recollections may vary.’ The audience in Wedmore can be confident of historical accuracy from the Sovereign and will be awed and amazed by the tumultuous goings on in his most colourful of lives.

What’s more, he will answer your questions in a frank and honest manner; you’ve never seen anything like it! 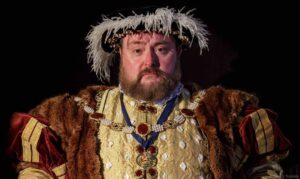 This performance is not suitable for under 12s